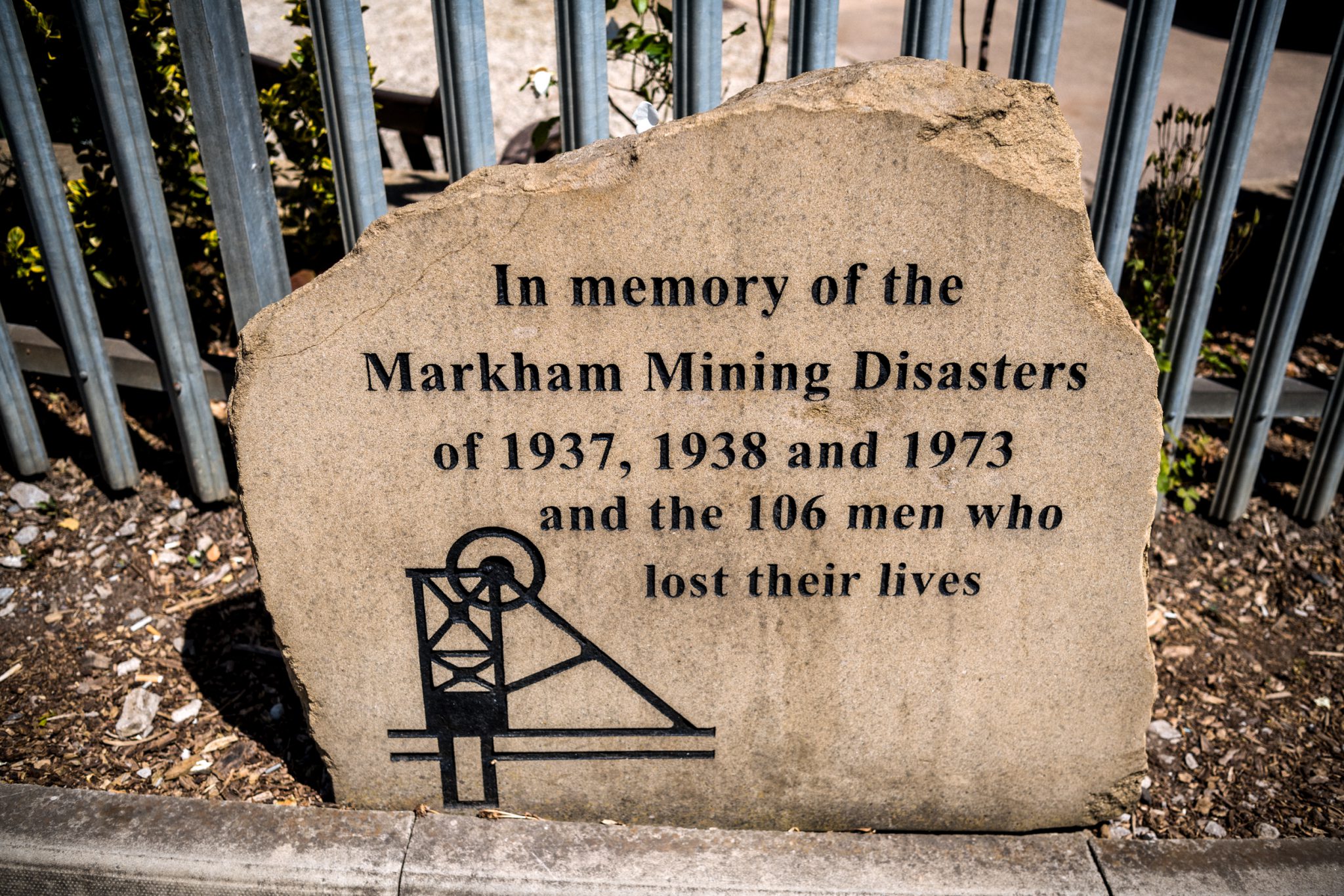 The men on the night shift went to work as usual on Monday 9th May 1938 not knowing that by the end of that ill fated shift more than two thirds of them would be dead or seriously injured. At 5.30 am the shift was coming to an end, some of the men had already started to make their way back to the pit bottom. This was the Black Shale seam, the deepest and the farthest away from the pit bottom – some one and a half miles. In the pit yard the men on the day shift were arriving ready to start work at 6am. Suddenly, underground, a tremendous draft got up followed by a terrific bang. Black coal dust and smoke filled the pit and a wall of fire swept through the seam. There had been an explosion of gas at the coal face. Some tubs carrying coal ran out of control and smashed into an electric joint box causing sparks which ignited the coal dust. 79 men were killed and 38 men were injured. Most of the men were married with young children. All 79 men were buried on Saturday, 14th May in 13 cemeteries. 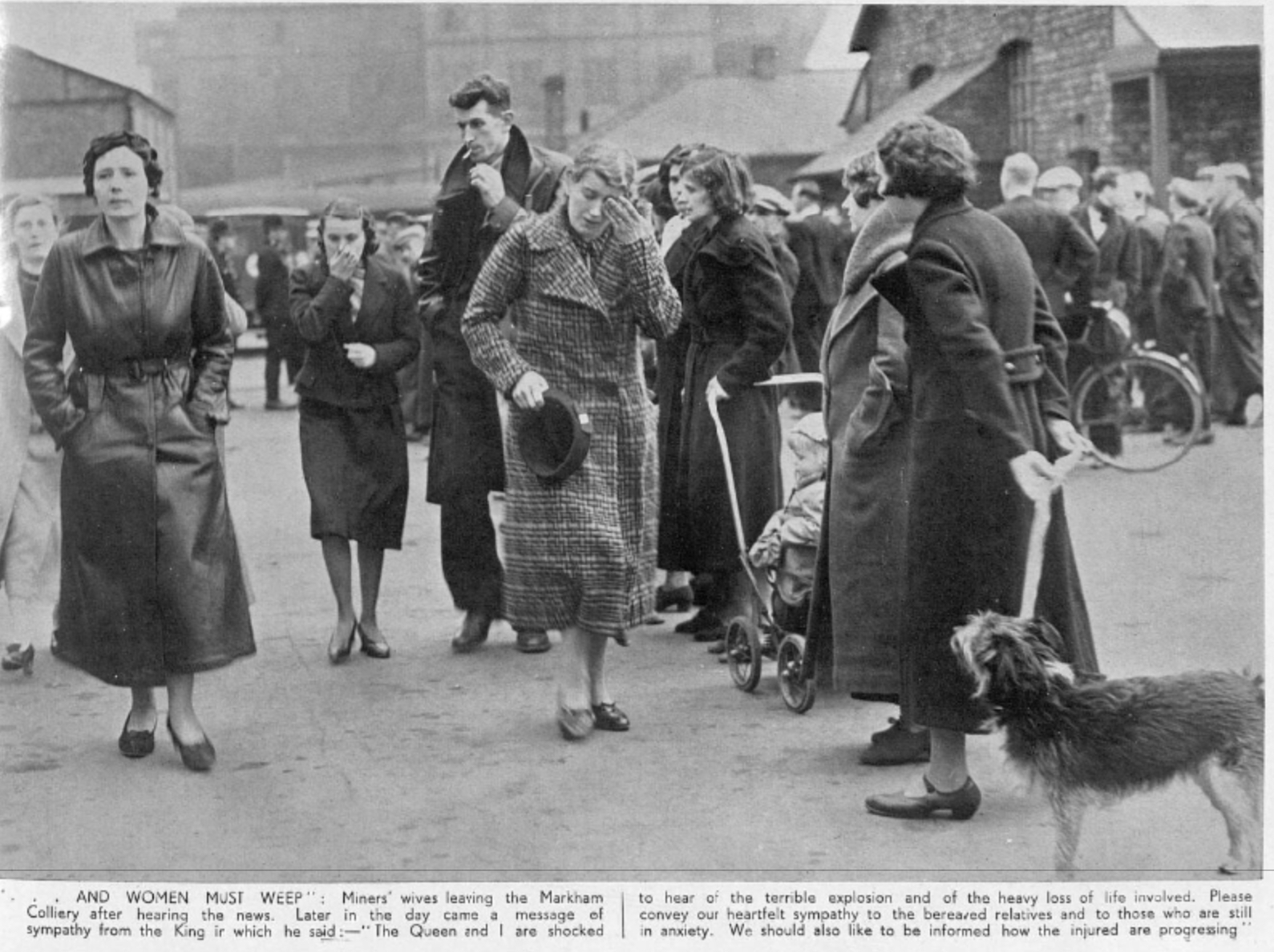 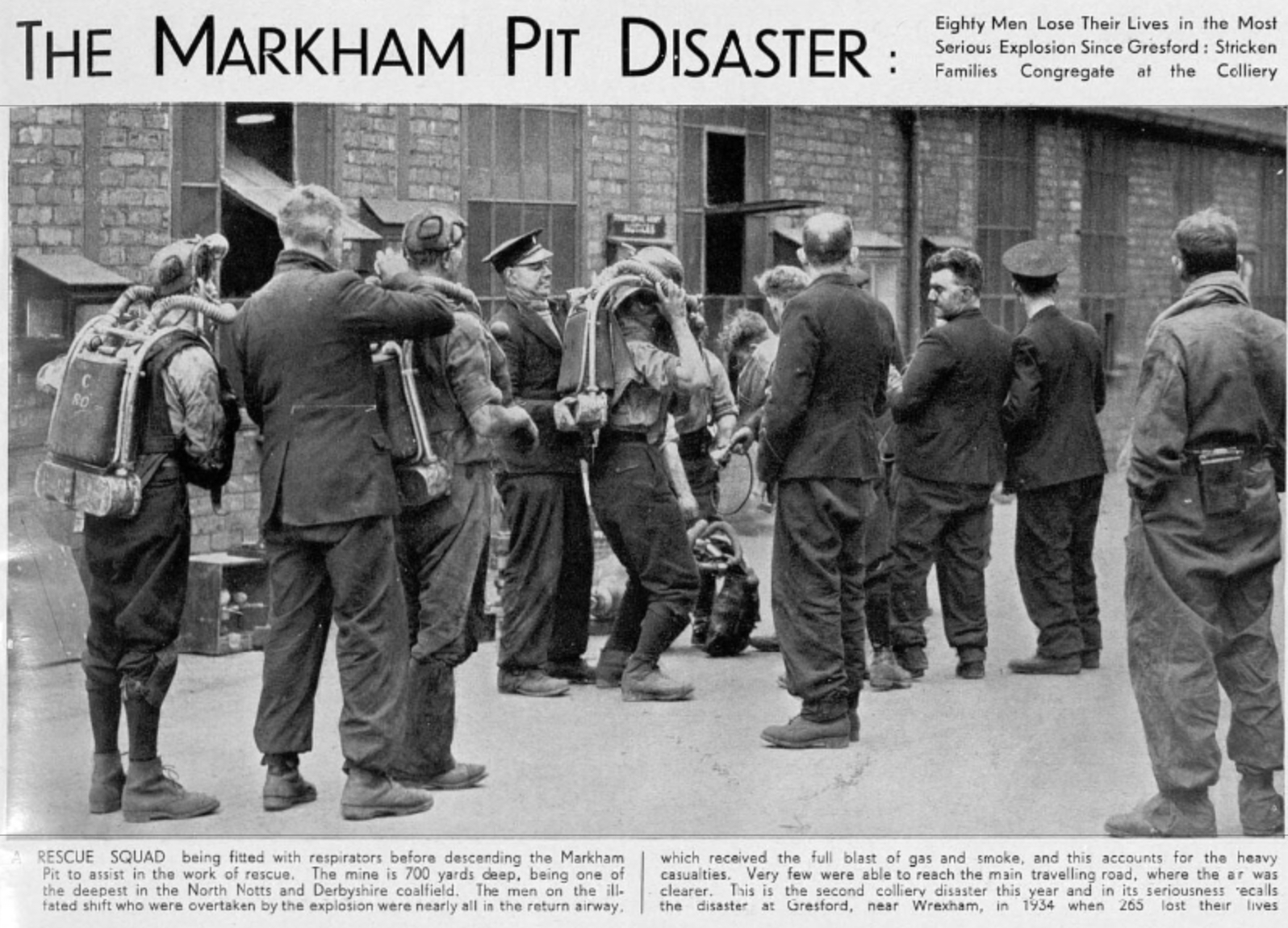 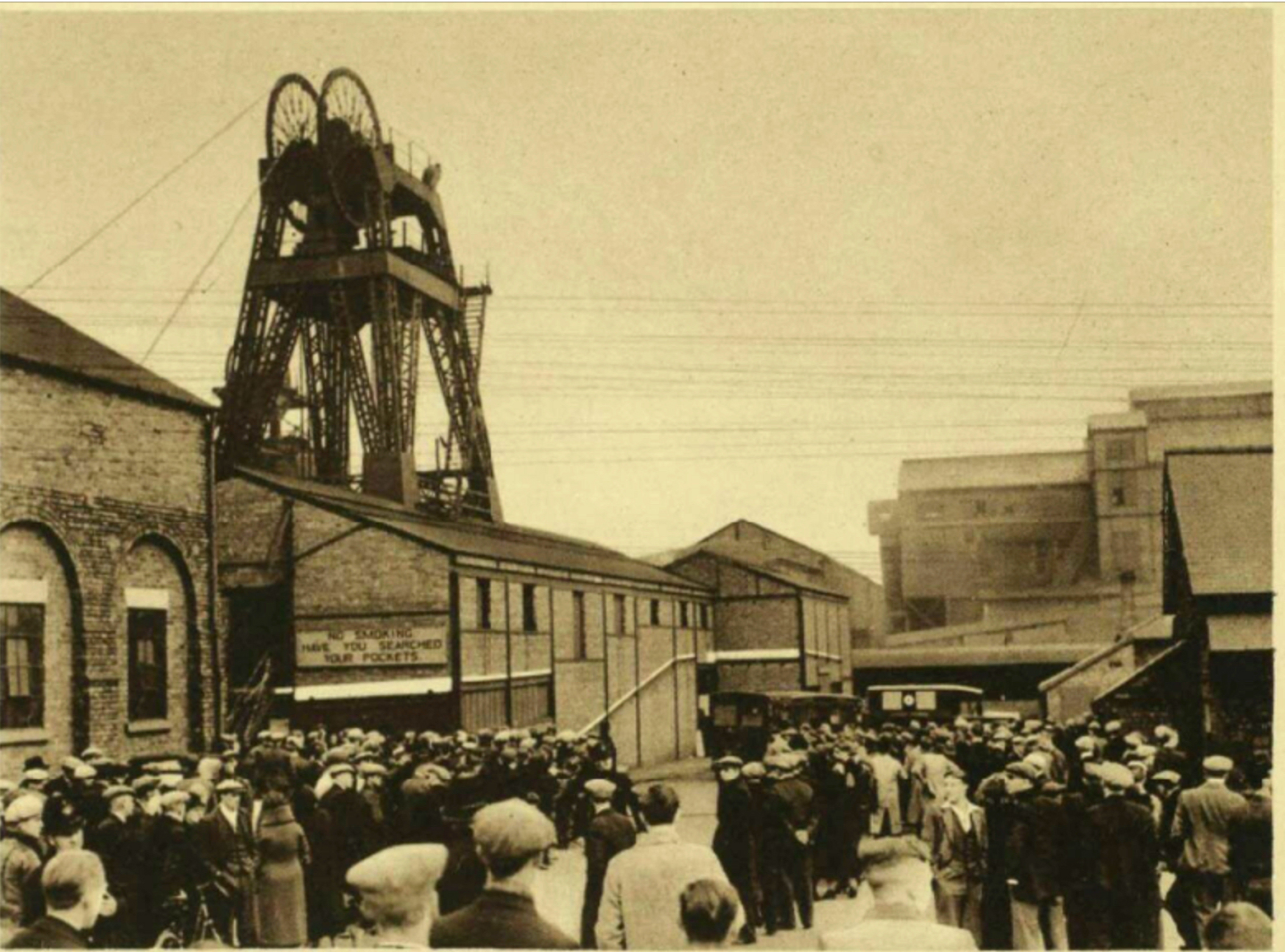 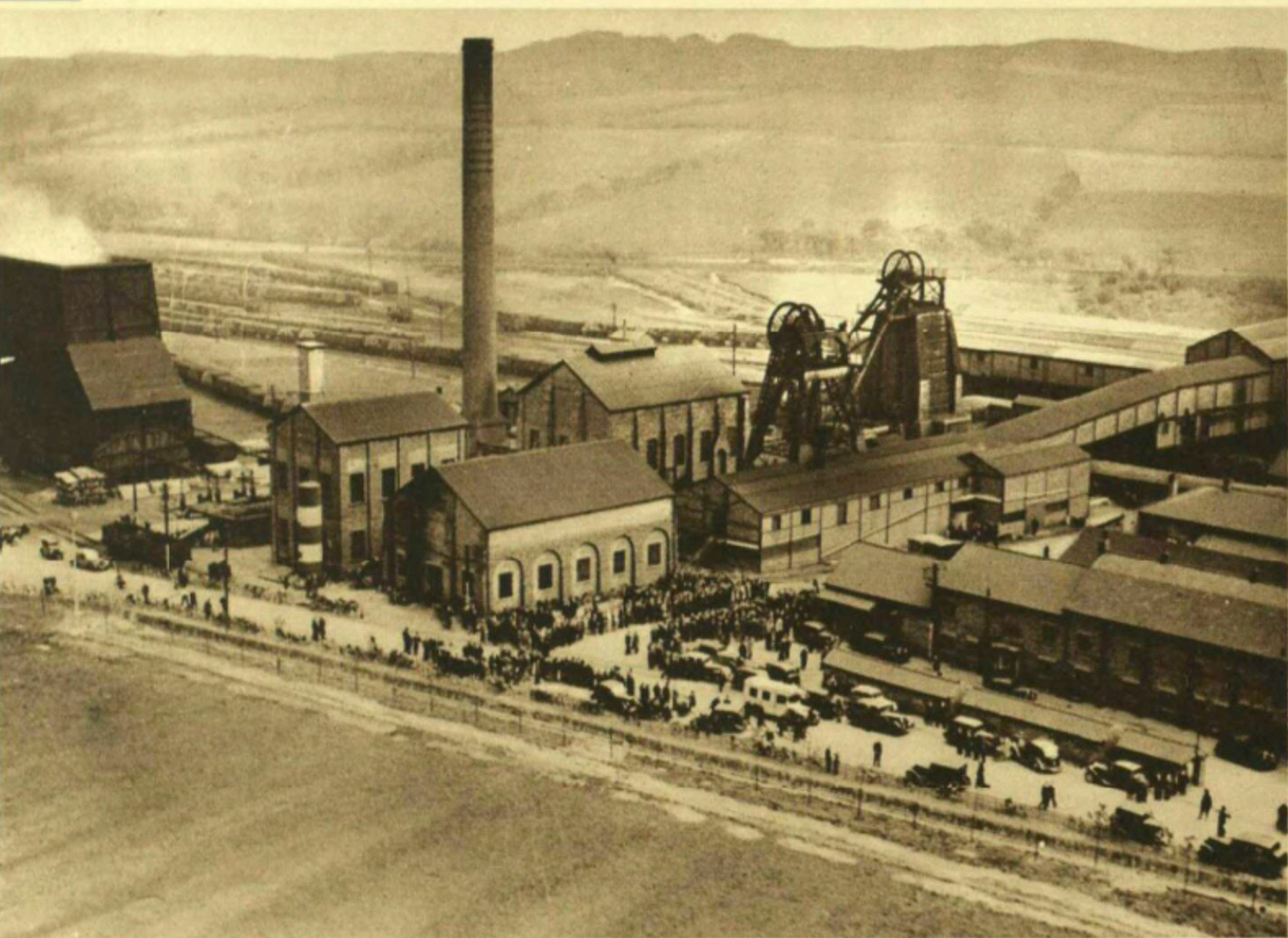 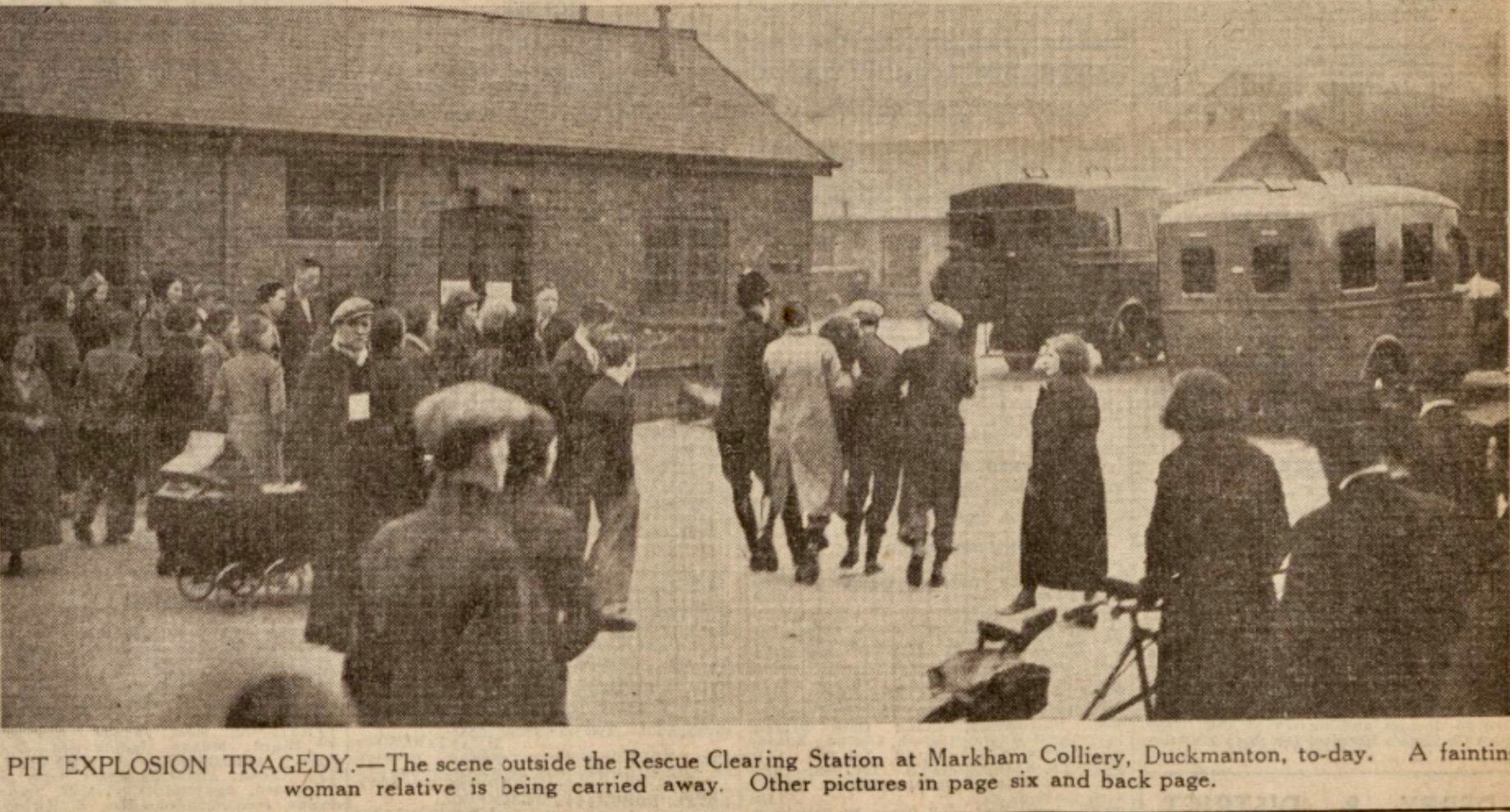 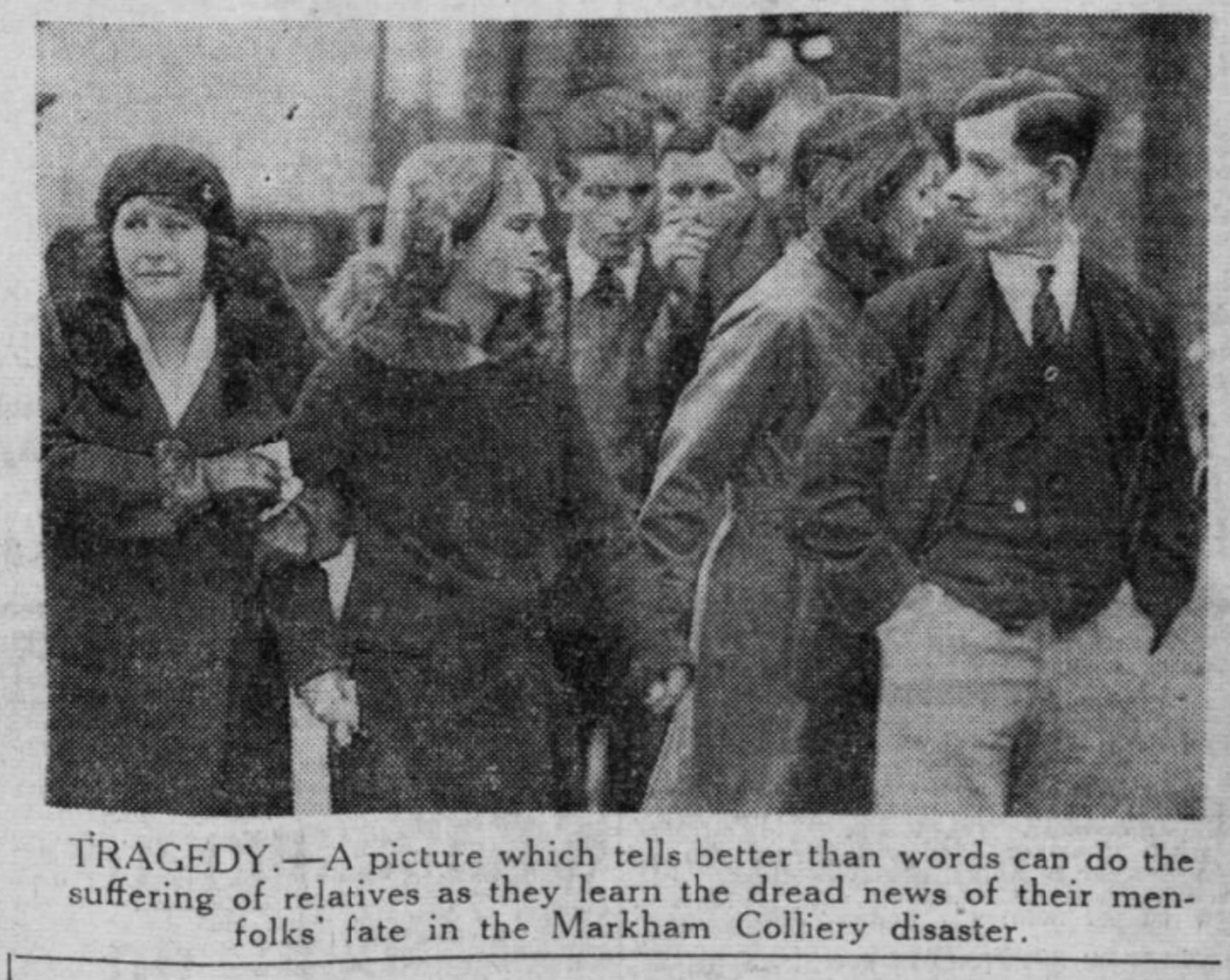 In a large gaunt dance hall, stripped of its decorations, the inquest on the 79 victims of the disaster at the Markham No. 1 Colliery, Duckmanton, Derbyshire on Tuesday was opened today.

Among those present was Mr Frank Lee, one of the miners’ M.P.s, Mr Enoch Overton, President of the Derbyshire Miners’ Association; Mr D.N. Turner, managing director of Staveley Coal and Iron Co., owners of the pit; and mr J. Hall, senior Inspector of Mines.

In low voices grief-stricken relatives followed close on one another and told how they had recognised the bodies of their menfolk. In under an hour 20 witnesses had been called. One of them was Mrs Elizabeth Grainger of Clowne, whose husband, son and brother-in-law died in the disaster. So the grim story went on – a father identifying his son, a son his father, others their uncles and brothers. From time to time there came through the open windows of the room where, only a short while before the tragedy, many of the victims had danced, the piping of a whistle from a neighbouring pit, where work was in progress.

Several of the witnesses were women. They confirmed the tidings which had stunned them; stories of husbands and brothers lying dead, and in some cases whole families being wiped out.

The body of the husband of Mrs Elizabeth Jacklin, of Duckmanton, was so badly mutilated as to be unrecognisable, but Mrs Jacklin said she identified her husband’s tattoo marks, a miner’s belt, and a pair of torn shorts which had belonged to him.

Among those who comforted the relatives after they had given evidence was Miss D. A. Payne, of the Ministry of Health. She told a reporter that 64 women had been widowed.

Tragic little incidents came here and there in the evidence. Mrs Beatrice Whelpdale, of Stanfree, described how her husband left the house singing on the way to work at 3.40 a.m., about two hours before the explosion.

Horace Hibbard, a collier, came straight from the pit, his face grimy with coal dust, to identify a friend he had known nearly all his life.

The funerals of the 79 men killed were all held on the same day, Saturday 14th May 1938. The funerals were widely reported

TEN MEN BURIED IN ONE GRAVE AT BARLBOROUGH

The funerals of the Markham Pit disaster victims took place on Saturday. The bereaved homes are scattered over a considerable area and arrangements were made for funerals to take place at different cemeteries.

Especially deep sympathy has gone out to the families whose losses have been the heaviest. Mrs Herbert Hargreaves, of North Crescent, Duckmanton, lost her husband and two sons in the disaster.

Mr. Emlen Grainger, of Clowne, lost two sons, and the widow of one of these mourns the death of a son as well as a husband.

From midday onwards there was a constant procession of hearses, mourning  carriages, and mourners on foot. Twenty-one funerals took place at Staveley, 15 at Duckmanton, and ten each at Bolsover and Barlborough, seven in the Chesterfield district, five at Clowne, three each at Poolsbrook and Brimington, two at Hollingwood, one each at Mastin Moor and Carr Vale and one at Accrington in Lancashire.

Sad scenes were witnessed in the packed streets, for 69 women had been widowed and 103 children left fatherless.

Military honours were accorded Lance Sergt. W. Frost and Lance Cor. J.Hardy, of Staveley, who were in the Anti-aircraft Battalion of the Sherwood Foresters, and the body of George Jackson, was borne by Legionaires.

The funeral expenses are being paid by the Staveley Coal and Iron Company.

All the shops in Clowne were closed during the funeral, blinds were drawn and from one or two houses the Union Jack was flown at half mast. The Rector the Rev. A. B. Gordon, conducted a short service in the parish church and afterwards led the tragic procession of widows and orphans to the graveside. The churchyard was crowded with sympathisers. John William Grainger and his son were buried in the same grave, while the other three others had separate graves in an adjoining plot. Two of the deceased men were ex-Servicemen – Jackson and Ambrose Grainger – and at the close of the service Mr. Tom Bateman, chairman of the local Legionaires, recited the exhortation and buglers of the Oxcroft Colliery ambulance division sounded the “Last Post” and “Reveille.”

A massed service for 14 of the men was held at noon in Staveley Parish Church, and was attended by the Mayor of Chesterfield (All. Hatton), Mr. D.N. Turner (managing director, Staveley Company), Mr. H. H. Berresford (commercial manager), Councillor F. Wickins (chairman, Staveley U.D.C.), Mr Miles Watts (Conservative agent), and others. At the cemetery several mourners, as well as members of the waiting crowd, had to receive attention from ambulance men.

At unfortunate hitch arose in connection with arrangements for two military funerals, one from Poolsbrook and the other from Staveley, which should have synchronised at the cemetery at about 3.30 pm In the absence of coaches for the mourners at Poolsbrook the local Territorials  sent an Army lorry and this was used to convey the coffin, private cars and vehicles from another funeral  being used as conveyances. This occasioned some delay, and in the other case a service for two funerals in the Staveley Trinity Church was held up for half an hour awaiting the arrival of the military funeral party. Eventually this service proceeded, and it was not until 4.30 that the military funeral party arrived at the church. The delay caused some distress to a wedding party who reached the church before the dispersal of the last batch of mourners.

The Salvation Army cap of Alfred Lamb, one of the victims, was buried with him. His 18-year-old widow, who is in a Chesterfield maternity home with her baby girl born 48 hours after her husband had been killed, said “No one else shall wear it.” Mrs. Lamb on Saturday received a gift for the baby from General Eva Booth, and a letter and 10s. note “from a mother” as well as numerous letters of sympathy.

The eleventh victim, Edward Salt, a colliery deputy, who resided at Poolsbrook, was buried earlier on Saturday in a grave adjoining that of his father (who was killed at the Crown colliery some years ago) in Barlborough churchyard. The Rev. G. W. Ready, vicar of Duckmanton, conducted the service. Bearers were provided by the Markham Colliery ambulance division, in charge of Sergt. F. Greaves, V.C.

Salt’s ambulance cap was buried with him

Fr. Gregson conducted the service for Leonard Atkin, who was a Roman Catholic, and Canon E. G. Walmsley officiated at the funeral of the other nine.

At Bolsover ten victims in all were conveyed at intervals into Parish Church, where Canon J. E. Paget, vicar of Pleasley and vicar of Bolsover until three weeks ago, returned to conduct the communal service and offer words of consolation to heartbroken relatives

After a service many of the grieved widows and relations broke down and had to be comforted and assisted by the men folk. Th funerals were those of D. Bann, G.C. Buckley, M. Richards and C. Silcock of Bolsover, W. Sherwin, G. Rowlands, R. Simms (Duckmanton), G. Cowley (Shuttlewood) and D. Whelpdale and J. Hadley (Stanfree). They were buried in separate graves. Canon J. E. Paget, conducted the one committal service. Councillor M. Stubbins, chairman of the Bolsover U.D.C, supervised the arrangements for the Bolsover district, and these were carried through with great efficiency.

In a small farming village three miles from Bolsover the body of G.E. Pether, also a victim of the disaster, was laid to rest in the churchyard of Scarcliffe. The funeral service was conducted by Rev, C, H. Talmay, vicar of Scarcliffe. A large crowd of sympathetic people gathered to pay their last tributes and much sorrow was felt for the young widow, who is left in tragic circumstances with four tiny children.

CAUSE OF MARKHAM DISASTER

“It was, indeed, by a sequence of events each one almost fantastically improbable that this explosion was brought about and developed” says Mr. P. E. Sandlands, K.C., the Commissioner, in his report on the inquiry into the explosion last May at the Markham No. 1 (Blackshale) Colliery at Duckmanton.

Mr Sandlands gives as as the cause of the explosion coal dust being ignited by sparking due to a collision between run-away tubs and a joint-box.

Seventy-nine men were killed and 40 were injured as a result of the disaster, which occurred when runaway tubs crashed into some steel arches which supported the roof. The arches hell, and with them an electric cable and joint-box.

The colliery is owned by the Staveley Coal and Iron Ltd.

Mr Sandlands has no fault to find with the management of the mine. “It is pleasant,” he states, “to note that everyone interested agreed that the mine was exceptionally well-managed and extraordinarily well-equipped with safety devices, and that the survivors united in praising the working conditions.”

Paying a tribute to to the heroic rescue work which was carried on after the explosion, the report says:-

“The courage, discipline, and capability of all those, who took part in the work of the rescue, from manager to workman, from rescue brigade superintendents to stretcher-bearers are beyond praise”

The Commissioner states that the view that the explosion was a coal dust one was held, he thought, by every witness. He was satisfied that there was no escape of fire damp at any material times sufficient to have been exploded, even if a suitable ignition agent had been available. No dangerous  quantity was found, even when, after the explosion, the ventilation was completely disorganised.

“If the explosion had not happened,” he adds, “! think it is clear that anyone experienced in these matters would have said that it was practically impossible for an explosion of coal dust in the east plane (the affected portion of the pit to have propagated to any great extent.” Mr. Sandlands reveals that it was suggested to him that he should deal with the question of  whether the use of electricity in mines ought not to be prohibited altogether within a period of ten years. “I prefer to say no more about it than this – that, from the evidence given at this inquiry, the use of any alternative method might well over a period of years, bring about more individual casualties than those proved to have been caused by electricity over a similar period,” he states.

“It may well be desirable that improvements in the design of apparatus driven otherwise  than by electricity should take place so that electricity may be ultimately eliminated from some, or, indeed, all mines. But the question is not one which I propose to discuss.”