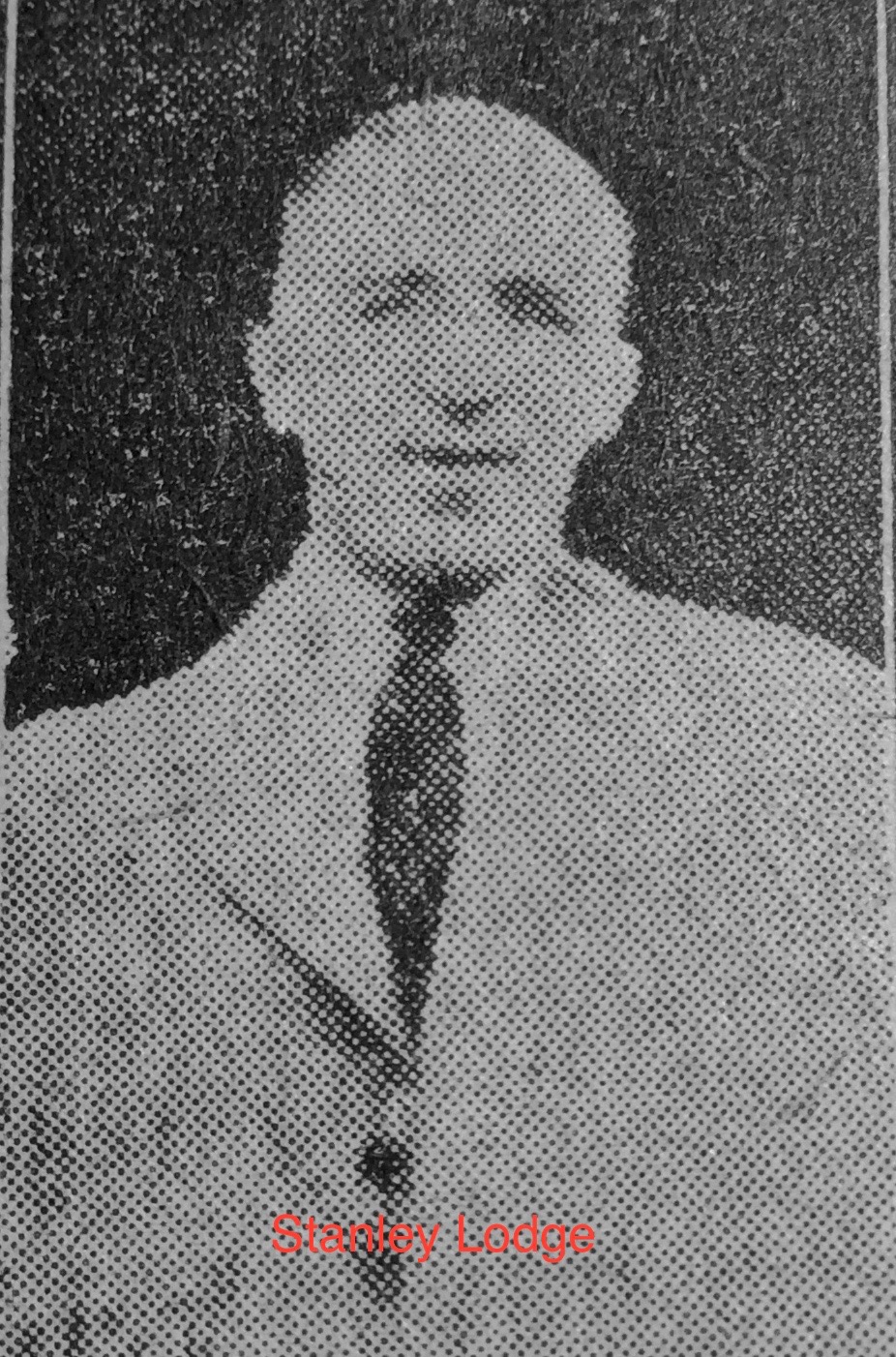 Stanley Lodge of Low Common, Barlborough was a football enthusiast and was prominently associated with the old Barber’s Row Welfare Club. He left his widow and family. He was buried at Barlborough in one large grave which was lined with ivy alongside ten of his peers.

Stanley was commemorated on the 29th May 2019. The location of the artwork can be found in zone 18 on the trail map which can be downloaded here.

Stanley Lodge (38), Low Common, Barlborough was a football enthusiast and was prominently associated with the old Barber’s Row Welfare Club. He buried his father and mother last year. He leaves a widow and family.

Stanley Lodge (1897 – 1938) was born in Lepton, Yorkshire in 1897. His parents were Robert Lodge (1871 -1937) and Evelyn Blanche Adams (1872 – 1936). His father had been born in Lepton, Yorkshire and his mother had been born in Eckington, Derbyshire. Stanley was their first of seven children. On the 1901 Census, Stanley, aged three, was living were his parents in Ince-in-Makerfield, which is close to Wigan. The rocks underlying Ince contained strata of cannel and coal and many collieries were sunk, the early pits were 120 to 900 feet deep, and subsequently to 1,800 feet. It’s coal pits included Moss, Ince Hall, Rose Bridge and Ince Colleries. Mining left a legacy of spoil heaps and flashes which were known as the Wigan Alps. They were living at 98, Petticoat Lane. By the time of the 1911 Census, the family had moved to Barlborough around 1904 and were living on Low Common. Stanley was thirteen years old and attending the local school. Stanley, aged 23, married Harriett Mary Hemingway in 1920. Their first child, Gertrude was born in the same year, but died later that year. Their first son, Stanley was born in 1921, but tragedy hit the family again when he died in the same year. They had a further four children.

At the time of the disaster, Stanley was working at Markham Colliery as a belt erector and was living at Low Common, Barlborough with his wife and children. Several newspapers mentioned Stanley and his family after the disaster. Sheffield Independent 11th May 1938 Mrs. Lodge was found by our representative grief-stricken. She was being cared for by neighbours. She said that her husband, Stanley Lodge, never feared work. They had been married for 17 years. Mrs. Lodge could not remember her husband ever drawing any State insurance pay for illness. Last week, she said she was unable to sleep and dreamed that her husband had been killed. “How pleased I was to wake up and find it a dream” she said, “but I never thought it would come true.” She bore her trouble with bravery and stated that she never remembered her husband having a scratch through his work. Derbyshire Times 13th May 1938 Stanley Lodge (38), Low Common, Barlborough was a football enthusiast and was prominently associated with the old Barber’s Row Welfare Club. He buried his father and mother last year. He leaves a widow and family. Funeral 14th May 1938 Derbyshire Times 16th May 1938 At Barlborough At the neighbouring village of Barlborough ten of the eleven were interred in one large grave, which was lined with ivy. They were: Rowe Kirk, Leonard Atkin, S.Lodge, Joseph Hibberd (sic), Frank Smith, Bernard Gregory, George Davidson, Charles Bown, Henry (sic Harry) and Colin Gee-Pemberton. The eleventh victim, Edward Salt, a colliery deputy, who resided at Poolsbrook, was buried earlier on Saturday in a grave adjoining that of his father (who was killed at the Crown colliery some years ago) in Barlborough churchyard. The Rev. G. W. Ready, vicar of Duckmanton conducted the service. Bearers were provided by the Markham Colliery ambulance division, in charge of Sergt. F. Greaves, V.C. Salt’s ambulance cap was buried with him. Fr. Gregson conducted the serice for Leonard Atkin, who was a Roman Catholic, and Canon E. G. Walmsley officiated at the funeral of the other nine.