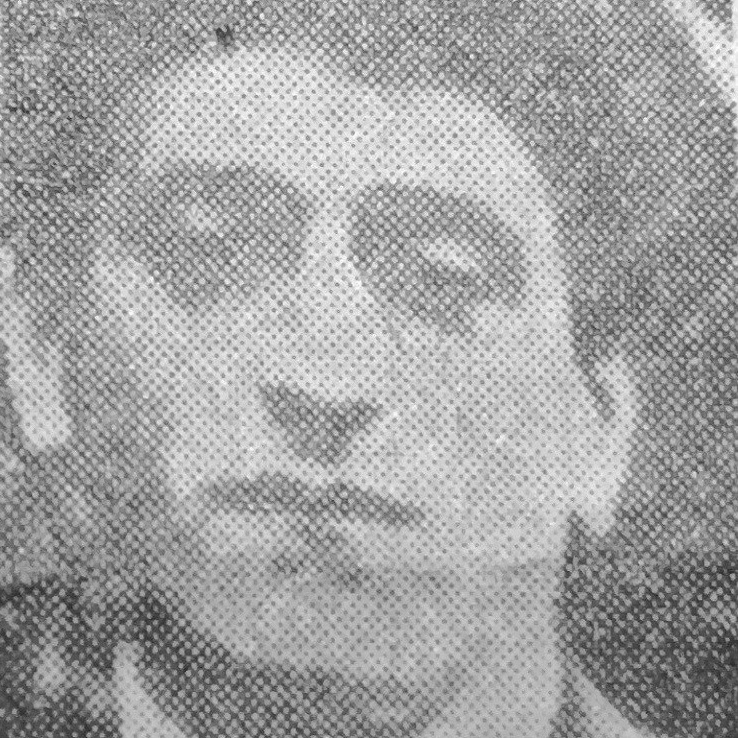 George Davidson was born in Barlborough in 1887. George was the 2nd of eight children and his father was employed as a coal miner. George married Evelyn Gladys Taylor in Barlborough Parish Church. George and Evelyn had 6 children, and 5 were still alive at the time of the disaster Eric, Douglas, Evelyn (1920 – 21, Ivor, Reginald and George. George was a well-known bowler who acted as club secretary at the Rodes Arms. He enlisted in the Coldstream Guards in the early days of the war, but after a short period of service, he was demobilised. George was buried in Barlborough cemetery on the 14th May 1938 in a mass grave with nine other Barlborough miners killed in the disaster, including his brother-in-law, Harry Taylor.

George was commemorated on the 29th May 2019.  The location of the artwork can be found in zone 16 on the trail map which can be downloaded here.

On the 1st June 1914 George married Evelyn Gladys Taylor in Barlborough Parish Church. The Derbyshire Courier reported on the wedding

Much interest was evinced in the wedding at Barlbro’ Parish Church, on Monday, of Mr George Davidson, son of Mr and Mrs George Davidson, of New Road, Barlbro’ and Miss Evelyn Gladys Taylor, eldest daughter of Mr. and Mrs Harry Taylor of Barlbro’. The bride, who was becomingly attired in a light lavender costume, with white hat and plume, was given away by her brother, Mr W Taylor. The bridesmaids were Miss Clara Taylor (sister of the bride) and Miss Gladys Cooke (cousin). The best man was Mr Ernest Sherwin (Clowne) and the ceremony was performed by the Rev. J. D. Griffiths. The bridal party motored to church. A reception was held at the home of the bride and a large number of guests attended. Mr and Mrs Davidson have been the recipients of many handsome presents.

George and Evelyn Gladys had six children, and five were still alive at the time of the disaster: