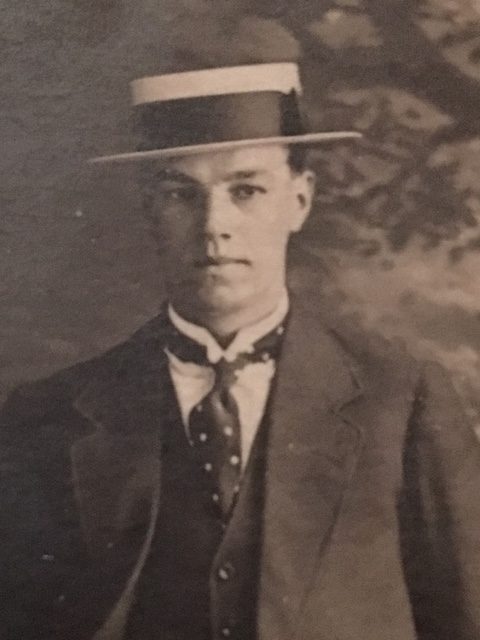 Arthur Carter of 7, North Crescent, Duckmanton, was born in Annesley Woodhouse, Nottinghamshire in 1897. Arthur’s father was also a miner. In 1920 at the age of 25 he married Miriam Stoppard and had two children James and Joan. He was a deputy at Markham Colliery since 1929 and formerly he played for teams in the Derbyshire Cricket League at Bolsover and Markham. Arthur was buried in Duckmanton Cemetery on 14th May 1938.

The commemoration took place on 16th September 2019. The location of the artwork can be found in zone 15 on the trail map which can be downloaded here.

Arthur Carter (1897 – 1938) was born in Annesley Woodhouse, Nottinghamshire. His parents were Harry Carter (1873 – 1932) and Ellen Godley (1872 – 1948). His father was from Annesley and his mother was a native of Kirkby in Ashfield. Arthur was their fourth child, following their marriage in 1891. Between the birth of Arthur in 1897 and the 1901 Census, the family moved from Annesley Woodhouse to New Bolsover. On the 1901 Census, Arthur, aged three, his parents and three older siblings are living at 142 New Bolsover. His father was employed as a stallman at a local colliery. By the time of the 1911 Census, the family had moved to 107 New Bolsover. Arthur now had eight siblings. His father was still employed as a stallman. His three older brothers all worked as pony drivers, while Arthur was still at school.

New Bolsover was a pit village built by the Bolsover Mining Company. It was started in 1891 and completed by 1896. The “Model” as it is known locally had 200 houses for miners and colliery officials. The village had a school and a Cooperative store. The village had no public houses, but the Institute serves workers with no more than three glasses of beer a day. The colliery employed a policeman and anti-social behaviour could result in fines or dismissal.

In 1920 at the age of 25 he married Miriam Stoppard (1898 – 1970) in the Chesterfield Registration District. Arthur and Miriam had two children

Mrs. Carter, widow of Arthur Carter, 40, of  7, North Crescent, Duckmanton, spent a terrible period of suspense in her home, not daring to go down to the pit.

“We thought he was injured and in hospital,” she said, “and we could not get either denial or confirmation until his brother Albert, who works the pit, broke the news to us us late in the afternoon”

She is left with a boy and girl. The former is an apprentice electrician at the colliery.