Henry Hudson (known as Harry) of 6 Grove Lane, Brimington Common, lived at home with his parents. He had worked at Markham for about 12 years and had been on the night shift for 8 of those years. He was a ‘Gate-end worker’ the loading end of the conveyor belt. He was interested in local sport, and was a member of Brimington Common Sports cricket team.

Harry was commemorated in July 2020. The location of the artwork can be found in zone 12 on the trail map which can be downloaded here. You can watch a short commemorative film here.

His father Mr George Hudson waited at the pit all day asking if there was any news of his son. Three times he cycled home to tell his wife there was no news. As he waited he made a list of the clothes his son was wearing when he went to the pit. The list included a postman’s waistcoat and a cream and black striped shirt. At 5 pm he went to claim Henry’s bicycle and sent his younger son, Horace, home with it. The news came – Henry was dead. His brother identified him. He was 27 years old and was buried at Brimington. 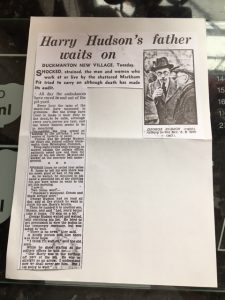 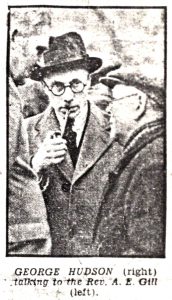