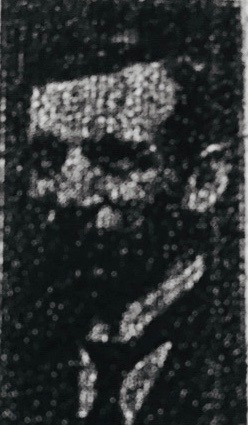 Arthur Henson of 49 Hartington road, Spital, was born on 6 October 1894. At the age of 17 he was working as an underground pony driver and in 1916 he married Annie Smith in Doncaster.  n the 6th May 1918, Arthur joined the Royal Garrison Artillery (No 4th Depot) and was stationed at Great Yarmouth and trained gunners for Coastal Defence. Arthur and Annie had two children Kathleen and Maureen Henson. He was buried at Spital Cemetery.

Arthur was commemorated in January 2018. The location of the artwork can be found in zone 20 on the trail map which can be downloaded here.

Arthur Henson was born on 6 October 1894 at 129 New Village, Bolsover. His parents were John Henson (1851 – 1900) and Mary Hopkin (1855 – ). Both of his parents came from Nottinghamshire. On the 1901 Census, Arthur was living with mother and eight siblings at 129 New Bolsover, Bolsover. His mother was a widow, since his father had died in 1900, at the age of 49. On the 1911 Census, Arthur was living with his widowed mother and other siblings at 133 New Village, Bolsover. At the age of seventeen he was working as an underground pony driver. In 1916 he married Annie Smith in Doncaster registration district, probably in Carcroft. The outbreak of WW1, changed many lives, including Arthur’s. He joined the Royal Garrison Artillery (No 4th Depot) on the 6th May 1918 in Pontefract. His regimental number was 216064. No 4th Depot was stationed at Great Yarmouth and trained gunners for Coastal Defence. His address at the time of enlisting was given as 26 Owston Road, New Village, Carcroft, Doncaster. Carcroft in 1907, was a small village of only 50 houses, but with the sinking of a new mine, Bullcroft Colliery in 1908, the village expanded rapidly and by 1910, an additional 400 houses had been erected to cope with the influx of miners and their families. Obviously, Arthur was part of this influx. Arthur and Annie had two children Kathleen and Maureen Henson. At the time of the accident, Arthur was living with his family at 45 Hartington Road, Spital, Derbyshire. He was employed at Markham Colliery as a Ripper. Arthur was buried in Spital cemetery on Saturday 14th May 1938. His wife and family placed several “In Memoriam” notices in the Derbyshire Times and Chesterfield Herald.

In May 1939 – “HENSON – Treasured memories of a dear husband and father, ARTHUR, who died in the Markham Colliery Explosion. May 10th 1938.

He never failed to do his best,

His heart was true and tender,

He toiled so hard for those he loved,

And left us to remember.

– From loving Wife and Family.

In May 1942 – “HENSON – Treasured memories of a dear husband and father, Arthur, who died in the Markham Colliery Explosion May 10th 1938.

A thought for today,

– From loving Wife and Family.