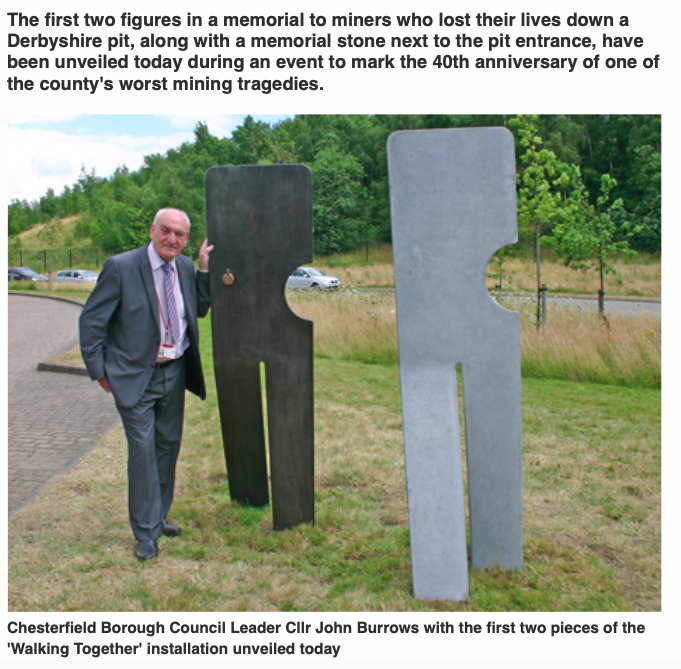 The first two figures in a memorial to miners who lost their lives down a Derbyshire pit, along with a memorial stone next to the pit entrance, have been unveiled today during an event to mark the 40th anniversary of one of the county’s worst mining tragedies. Eighteen miners died and 11 others suffered serious injury, when the mechanical brake failed on a lift carrying them to the coalface failed at Markham Colliery on 30th July, 1973 and they plummeted to the bottom of the shaft.

It was the third disaster at the colliery, following accidents in 1937 and 1938, resulting in a tragic combined total of 106 miners losing their lives.

The former colliery area has now been reclaimed and is home to Derbyshire County Council’s £77m Markham Vale regeneration scheme, which is working to create 5,000 jobs on site for local people.

The county council, Staveley Town Council, and Alkane Energy – whose premises are above the site of the mine shaft where the disaster occurred – worked together to organise the memorial event, led by Father Stephen Jones, Rector of Staveley, during which a commemorative stone was unveiled.

The ‘pit checks’ on the first two figures to be unveiled, bears the names of the youngest and oldest miners killed in the disasters (above).

The youngest miner was 18-year-old Arthur Brown, a pony driver killed in the 1938 disaster and the oldest was Albert Tyler, a 64-year-old back repairer who died in the 1973 disaster.

Every tag on the 106 steel figures will trigger a different piece of information – including video, audio and written works – via apps and web links through mobile phones and hand held devices.

These will include interviews with local miners, historians, accounts of the mining disasters, and GPS-generated maps of tunnels running beneath the feet of visitors.

A group of former miners and pupils from nearby schools have been working with artist, Stephen Broadbent, on the project which is expected to be completed in 2014.

A reception was then hosted at the county council’s Markham Environment Centre following the service which included displays of:

The county council is seeking financial backing for the Walking Togetherartwork. If you or your business are interested in supporting this worthwhile project, contact Peter Storey, Head of Markham Vale, on 01629 535417.

The grandaughter of one of the miners who lost their lives in the disaster spoke with The Chesterfield Post about the day her grandfather died, and her pride that he and his colleagues are now being honoured in this way,

Tracey Rouse is the grandaughter of 59-year-old William Joseph Brocklehurst(right) who was a Deputy at Markham in 1973.

Although he lived in the immediate aftermath of the accident – he died two days later on August 2nd, after being in intensive care for those days,

Although Tracey was only four years old at the time, she told us the memory of that time is sharp, “I can still remember the vision of the corridor at the hospital with lots of people crying and being upset.

“My mum, Ruby Townsend, told me that my grandma turned black with shock when she was told he had died.

“Mum has kept all the clippings, hoping her dad would pull through so she could show him but, after his death, she threw them all in the bin. They were recovered however and were at the service with her to keep the memory alive.

“I think it’s lovely to remember these miners and acknowledge this – I have been looking forward to seeing the unveiling – it’s been an emotional day.

“Mum says that although it was like reliving the disaster all over again, she was hoping to see other families that she hadn’t seen for 40 years.”