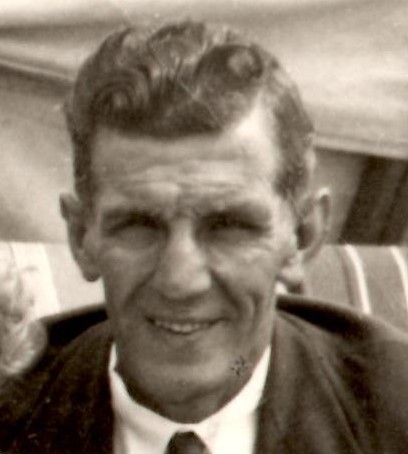 To view a filmed interview with Sandra Pembleton about William Yates click here.

William Yates’ father was born on 8/5/1885 with his twin Alice. They were baptised in the parish Church at Brimington on 12/6/1885. Alice was buried on 8/10/1885. The 1891 census has William Yates aged six  & born in Brimington Derbyshire along with six siblings. The 1901 census states he is still living at Brimington Common & working as a labourer aged 15. At the age of 21 William, a coal miner of New Brimington, married Ethel Adey aged 18 of 138 Arkwright Town at the register office in the district of Chesterfield on 4/6/1906. Their fathers are named as John William Yates a coal miner & Thomas Adey a coal miner. Witnesses were John Thomas Adey & Mary Ellen Hayes.

The 1911 census states the family are living at 27 South Moor Road Brimington Common. William died 23/10/1921 aged 36. He was a coal miner/ripper underground. The death certificate states he died of 1 lymphadenoma  2    exhaustion.  Ethel Yates of Arkwright Town, widow of the deceased, was present at the death.  Ethel was now alone bringing up a family, so she married again.  The wedding took place at Bolsover Parish Church on 18/11/1922 between Ethel Yates aged 33, widow of Shuttlewood and George Brothwell aged 39, miner of Shuttlewood. Ethel and George had a family together.

The couple had a son, William Valentine Yates born 20/7/1932 & known as Bill Junior. The family lived close to Shuttlewood School where Bill went. William went to evening school to gain his Deputy Papers. To gain his Manager’s Papers, he had to travel to evening school held in Sheffield. As this was at the time that Sheffield was being bombed, his wife refused to allow him to travel & so he never did gain his Manager’s Papers. The family moved to a shop at the bottom of the Wimpey Estate, Bolsover. Ethel May ran the shop and, when William was not at work, he drove a green van around doing deliveries. William kept working in the colliery alongside his brother Ron & later his son, Bill. In the early 1950’s the family moved to Moor Lane Bolsover. Around 1956 the family moved for William’s last time to new bungalows on Welbeck Road Bolsover. William enjoyed watching cricket and tennis on TV; gardening; having new cars & going on holiday in his caravan with Ethel & their dog (usually a poodle).

All the family had been together the day before the accident because on that Sunday afternoon there was a christening at Clowne Church. Hours later, William was fighting for his life. He struggled for days being the last man to die.

The death certificate  states William died on 15/8/1973 at the Royal Hospital at Sheffield. The certificate received from Michael R E Swanwick, Coroner for Hundred of Scarsdale. Inquest held 24/4/1974.
Cause of death:

The commemoration took place on 22nd September 2016. The location of the artwork dedicated to William can been seen here. Zone 4