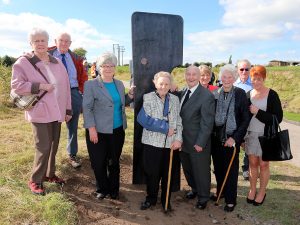 Miners who lost their lives down Markham Colliery are being remembered as the latest phase of an art project is unveiled at Derbyshire County Council’s flagship regeneration site.

Eleven new life-size steel figures were unveiled as part of the Walking Together memorial which will eventually feature 106 figures stretching between the village of Duckmanton, Chesterfield and the former pithead of Markham Colliery.

The walking trail symbolises a miner’s journey to the pit and back home again and represents the 106 men who lost their lives in three accidents at the site.

Eighteen miners died and 11 others suffered serious injury when the mechanical brake on a lift carrying them to the coalface failed at Markham Colliery on 30 July, 1973.

It was the third disaster at the colliery, following accidents in 1937 and 1938 in which 77 miners lost their lives.

The new figures join eight existing ones at the site. The first two were unveiled in 2013 to mark the 40th anniversary of one of the county’s worst mining disasters.

The former colliery area has now been reclaimed and is home to the county council’s £88m Markham Vale regeneration scheme which is working to create 5,000 jobs on site for local people.

Leader of Derbyshire County Council and Cabinet Member for Strategic Policy, Economic Development and Budget, Councillor Anne Western said: “Our miners were brave and hardworking men and everybody who lives locally will have a family member, or know someone, who worked down one of the area’s many pits.

“It’s really important that we remember those lost and provide a place where families, friends and future generations can visit to pay tribute and also learn about Derbyshire’s mining history and the challenging jobs these men had.

“Great strides have been made to regenerate Markham Vale and we’ve brought over 938 jobs to the area so far and have welcomed many new businesses – but we will never forget the importance of its past, or the sacrifice these men made.

There are now 19 figures in total at the site – each figure will carry a tag with the name of one of the miners, along with their age and job role.

One of the figures has been sponsored by relatives of Charles Moreton who worked at the site in the 1930’s and was tragically killed in the 1937 disaster.

And ten of the figures have been sponsored by local businesses at Markham Vale including one from Henry Boot Developments – the county council’s private sector property partner.

Image: The family of Charles Moreton who died in the 1937 disaster, with the figure they supported in his name.