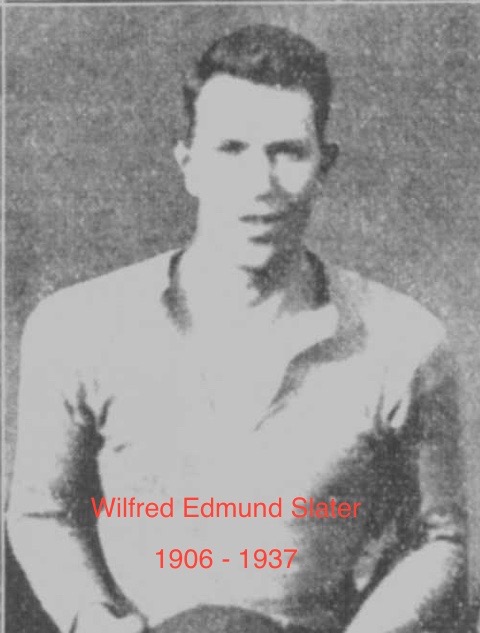 Wilfred Edmund Slater of 10 Canal Wharf, Chesterfield was born at Birdholme.Slater was one of the organisers of the Canal Wharf Children’s Outing and was a member of the Canal Wharf F.C. and Canal Wharf C.C.  He had lived at Canal Wharf for eight years and had worked at Markham Colliery for a similar period. His father was also employed as a coal miner. He left his widow Emily and 4 children Philip, Roy, Kenneth and Rosemary and was buried in Stonegravels cemetery.

Wilfred Edmund was commemorated on 22nd September 2016.  The location of the artwork can be found in zone 18 on the trail map which can be downloaded here.

The funeral took place on Tuesday, the internment in Christ Church cemetery, Stonegravels, Chesterfield, preceded by a service in Christ Church, conducted by the Rev. F. Ginever.

Wilfred Edmund Slater ( 1906 – 1937) was born in Birdholme near Chesterfield in July 1906. His parents were George Arthur Slater (1879 – 1969) and May Ann Bond (1882 – 1942). Both of his parents came from Hasland, Derbyshire. Wilfred Edmund was their second of six children.  On the 1911 Census, Wilfred Edmund, aged four is living with his parents and two siblings at 273 Birdholme, Derbyshire. His father was employed as a coal miner – hewer.

When the accident happened on 21st January 1937, Wilfred Edmund and his family were living at 10 Canal Wharf in Chesterfield. He was employed at Markham Colliery as a Stallman.

Further details can be downloaded here: