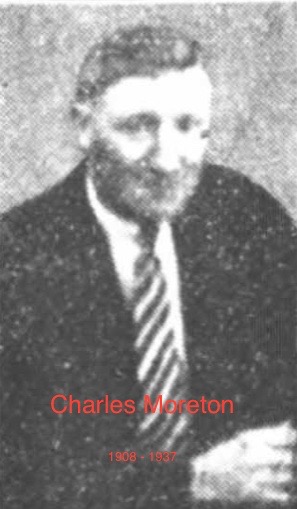 Charles Moreton of 3 Elm Street, Hollingwood, was born in clowne and had worked at Markham Colliery for 6 years.  He was fond of sport but had been unable to take part because he was on afternoon shifts regularly. He had been a member of Brimington Club since coming to Hollingwood. Charles left his widow and 3 children Raph, Jean and Roy and was buried in Hollingwood cemetery.

Charles was commemorated on the 22nd September 2016. The location of the artwork dedicated to Charles can be found in zone 19 on the trail map which can be downloaded here.

Mr C Moreton, 3 Elm Street, Hollingwood was 29 and was married with three children. Although fond of sport he had been unable to take part because he was on afternoon shifts regularly. He had been a member of Brimington Club since coming to Hollingwood and had been working at Markham Colliery for the past six years. Rev E.A.E. Gill conducted the service in Hollingwood Church on Tuesday.

Charles Moreton (1908 – 1937) was born in Clowne on 15thJune 1908. His parents were William Harry Moreton (1882 – 1959) and Hannah Wardle (1881 – ). His father was from Burslem in Staffordshire and his mother was from Pye Hill in Nottinghamshire. On the 1911 Census, Charles aged 2 was living with his parents, an older brother and a younger sister at 70 Neale Street in Clowne. His father was employed as a miner – filler (below ground).

Very little is currently known about the three children.

At the time of the accident on 21stJanuary 1937, Charles and his family were living at 3 Elm Street, Hollingwood. He was employed at Markham Colliery as a cutterman.

Further Information can be downloaded here.