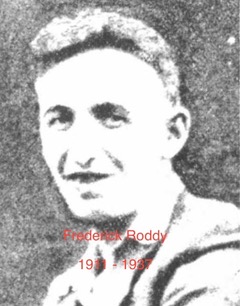 Frederick Roddy of 51 Poolsbrook Road, Duckmanton was a native of Mosborough and had worked at Markham Colliery for 7 years. He used to be in the Eckington Band and was also a keen motor-cyclist. At school, he was a member of the school football team and for 6 years he was in the 1st Mosborough Troop of Boy Scouts. Frederick’s wife, Mary, also lost her cousin Leonard Cadywould in the 1937 accident.  He was buried in Staveley Cemetery.

Frederick was commemorated on the 21st July 2017. The location of the artwork can be found in zone 5 on the trail map which can be downloaded here.

Frederick Roddy (25), 51 Poolsbrook Road, Duckmanton, leaves a widow, but no family. Born in Mosboro’, he went to live at Duckmanton seven years ago, since when he had worked at Markham Colliery. He used to be in Eckington Band and took part in a contest at Leicester. He was a keen motor-cyclist.

His widow has received a double blow, for Cadywould, another of the dead men, was her cousin.
Mr Roddy was the son of the late Sgt F Roddy. When he went to Mosbro’ C. of E. School he was a member of the school football team. For six years he was in the 1st Mosbro’ Troop of Boy Scouts. The internment took place in Staveley Cemetery, following a service in Staveley Parish Church. The Rev. H.H. Dibbera officiated. Mr. H Kirk (representing the Staveley Company) was present in church.

Frederick Roddy of 51, Poolsbrook Road, Duckmanton, was a native of Mosborough. He had been married to Mary Waddoups for about two years. When Mrs Roddy was interviewed it was not known if her husband had been rescued or not. Then the bad news came, he had been killed. Mrs Roddy had some more bad news, Leonard Cadywould, her cousin, was also among the dead. Frederick Roddy, a keen motorcyclist was 25 years old. He was buried at Staveley Cemetery

Further information can be downloaded here