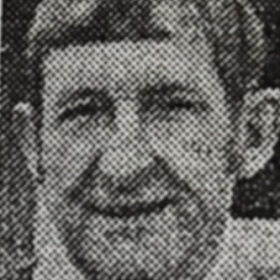 Joseph William Brocklehurst of 2 Ashgate Road, Chesterfield, had worked at Markham Colliery for 18 years. He had been a Deputy for 10 of those years. Joseph previously served as a Sergeant in World War II with the Royal Corps of Signals for 7 years, serving in Burma, North Africa and Egypt. He was a member of the Markham Colliery division of the St John Ambulance Brigade and his colleagues formed a guard of honour at his funeral. He left a widow, 4 daughters, a son and 7 grandchildren. Joseph was cremated at Brimington.

Joseph was commemorated in July 2020. The location of the artwork can be found in zone 10 on the trail map which can be downloaded here.

The two latest victims of the disaster were Mr Joseph William Brocklehurst and Mr. Albert Tyler. The former died on Thursday week and the latter on Friday. Both funerals took place yesterday afternoon.

Mr Brocklehurst (59), 2 Ashgate Road, Chesterfield, had been a miner all his life, except for active service with the Royal Corps of Signals during the World War. He began working at Grassmoor Colliery when he left school and later moved to Williamthorpe, from where he was transferred to Markham Colliery 18 years ago. For the past ten years he had been a deputy and for the same period had been a keen serving member of the St. Johns Ambulance Brigade. Mr Brocklehurst had been married for 36 years. He leaves a widow, four daughters, a son and seven grand-children.