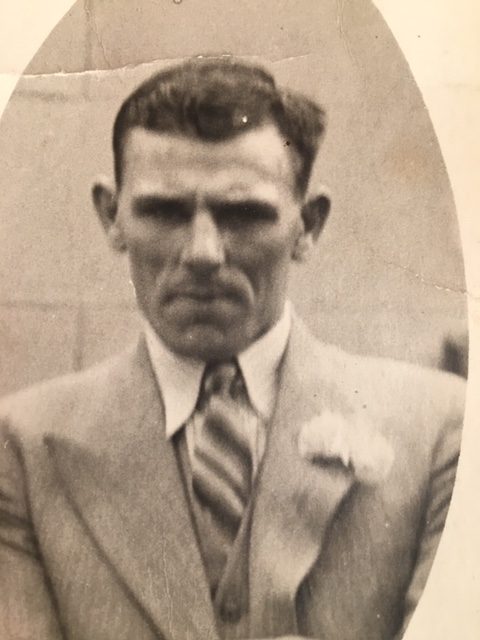 John was commemorated on 16th September 2019. The location of the artwork can be found in zone 15 on the trail map which can be downloaded here.

Given away by her father, the bride wore a dress of white satin, with wreath and veil, and carried a bouquet of red carnations and fern. Her sisters Edna and Florrie were bridesmaids and they were attired in dresses of pink and blue suede georgette respectively, and both wore white satin gloves, white satin shoes, and head-dresses of cornflowers. They carried bouquets of cornflowers, forget-me-nots and fern. Two small attendants, both nieces of the bridesgroom, Brenda Caffrey and Monica Rooney, were dressed in flowered blue georgette, and carried small replicas of the bridesmaid’s bouquets. Mr Arthur Longmate (bride’s brother) was best man, and Mr William Caffrey (bridegroom’s brother-in-law) was groomsman.

After the ceremony, 80 guests attended a reception at the home of the bride’s aunt, Mrs. True, 29, London Street, New Whittington. The bride has been an attendant at Whittington Hall Institution for the past seven years, and on her resignation 14 wedding presents were handed to her by the Matron and various members of the staff.

At the time of the disaster, John, aged 26, was working at Markham Colliery as a rope greaser and was living with his wife and new son at 14 Cross London Street, New Whittington, Derbyshire.

In May 1944 the family placed an ‘In Memoriam’ notice in the Derbyshire Times.

He lives for ever in our hearts”