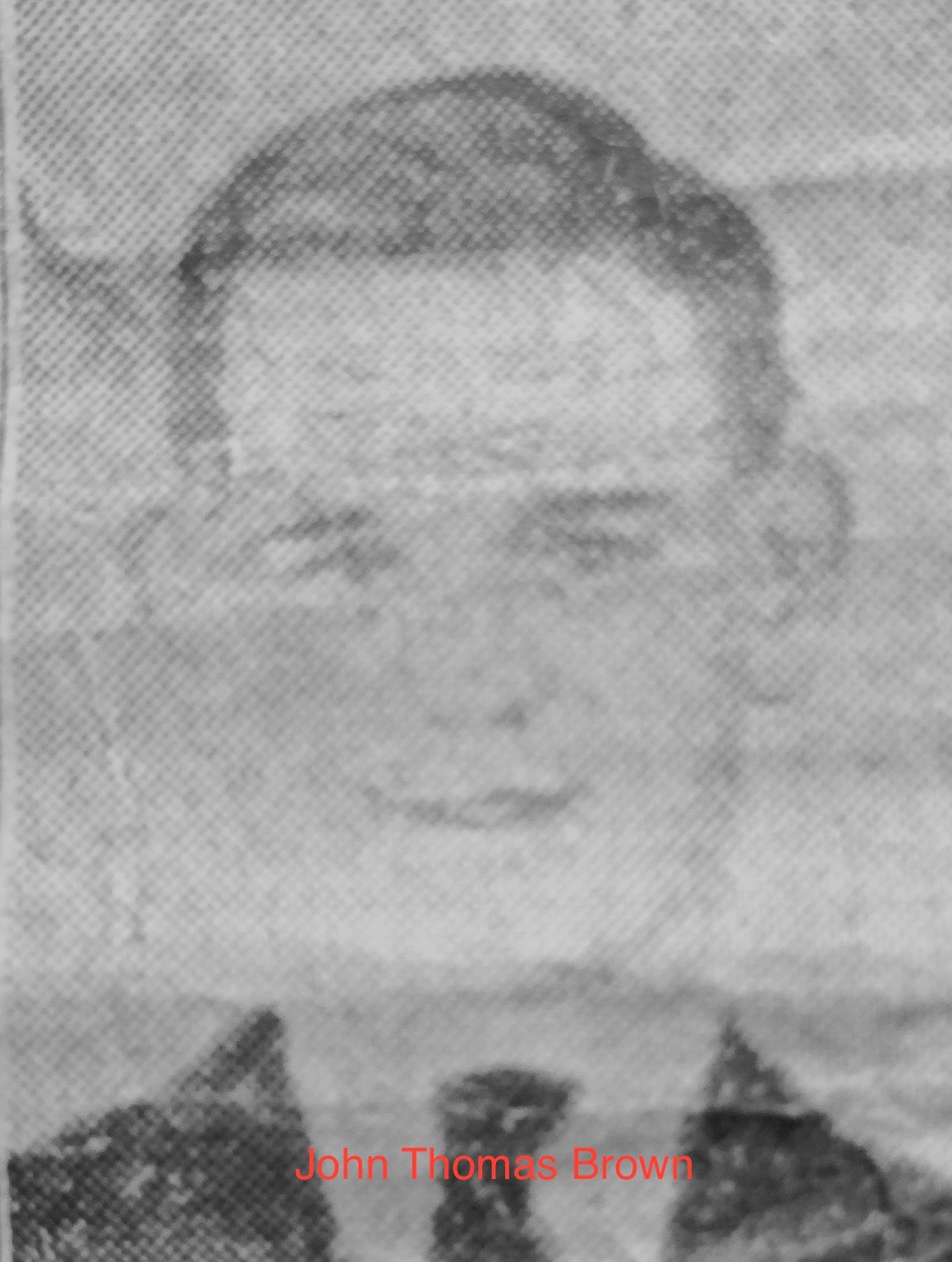 John Thomas Brown of 29, Orchard Road, Carr Vale, was married to Agnes and had a three year old son, Kenneth. The Brown’s family suffered a tremendous loss with Johns’ father John James Brown being seriously injured and his brother Arthur Brown also killed. Another son of John James Brown, Joseph, was waiting at the pit head when the disaster happened, ready to start work on the day shift. John Thomas and Arthur Brown were buried together at Duckmanton Cemetery.

John Thomas was commemorated on the 26th September 2018. The location of the artwork can be found in zone 3 on the trail map which can be downloaded here.

Another family to suffer a tremendous loss were the Brown’s of 56, Poolsbrook Road, Duckmanton. John James Brown and two of his sons Arthur and John Thomas were all working on the night shift that fateful night. John James was seriously injured and taken to Chesterfield Hospital. During the night a man was brought into the next bed to him. He was unconscious and so badly burned that he could not be recognised. Relatives of the miners were allowed to go to the hospital to see if they could identify him as their husband, son, father or brother but no-one could. During the night he came round and whispered his name ‘Arthur Brown’, and then he died. John James Brown did not know that it was his own son next to him. Later on, John James was told that his son John Thomas Brown was also dead. John James Brown aged 56 years survived. Arthur Brown was just 18 years old, the youngest miner to die and had lived at home with his parents. John Thomas Brown aged 26 years of 29, Orchard Road, Carr Vale, was married to Agnes and had a three year old son, Kenneth. Another son of John James Brown, Joseph, was waiting at the pit head when the disaster happened, ready to start work on the day shift. Arthur and John Thomas Brown were buried together at Duckmanton Cemetery.

By 1938, John Thomas, his father, and two other brothers were all working at Markham Colliery. Alan was too young, and still at school. On the 10 May 1938, John Thomas was working the night shift with his father and youngest brother, Arthur. John Thomas was killed, along with his brother. His father was seriously injured. There were various newspaper articles, which focussed on the tragedy inflicted on the Brown family.

‘Her other son, John Thomas Brown (36) had been married for three years and lived at Orchard Road, Carr Vale. He was a timber drawer. Mrs. Brown visited her husband in hospital and broke the news of the death of their sons. “it was no good keeping it from him” she said. Mr Brown told his wife that one of the sons had been working with him. When the explosion came Mr. Brown told his son to run. But he stopped to put on his coat’

“The father and two sons were all employed on the night shift as timber drawers (sic) when the explosion occurred. Another son, Joseph Henry Brown, was on day work and he had reached the pithead in readiness to go down when he learned of the disaster. Realising that his father and two brothers were below he ran back home to inform his mother.”

Two years after the disaster, Agnes, his wife placed an ‘In Memoriam’ notice in the Derbyshire Times and Chesterfield Herald.

“Brown – In loving memory of a good husband and father, Jack

From Agnes and Ken.