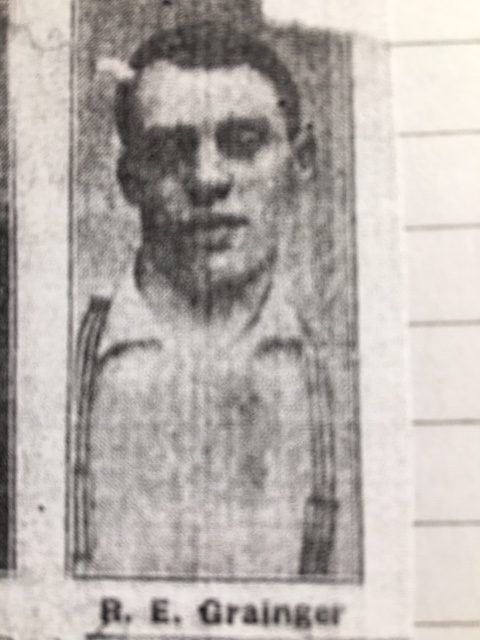 Robert had attended Netherthorpe Grammar School, having gained a scholarship from Clowne Senior Boys’ School. He worked with his father at Langwith Colliery, then at Oxcroft No 3 Colliery, before they both went to the Markham Pit about four months prior to the disaster. John William and Robert Emlen were buried in the same grave. Ambrose was buried in the next grave to them at Clowne Cemetery.

Ambrose, John and Robert Grainger were commemorated in September 2016. The location of the artwork can be found in zone 18 on the trail map which can be downloaded here.

For Mr Emlen Grainger aged 78 years of Crown Street, Clowne, it was all too much to bear. He collapsed at the graveside as two of his sons John William and Ambrose and his young grandson Robert Emlen were lowered into the ground at Clowne Cemetery while his third son, Thomas, lay seriously injured in hospital, and had previously only just escaped from the pit in the 1937 disaster. John William Grainger and his son Robert, lived at 27, Crown Street, Clowne. They had only been at Markham for about four months having previously worked at Langwith and Oxcroft pits. At home that morning, Mrs Elizabeth Grainger was getting the breakfast ready for her husband John William and her son Robert, while her younger son John was waiting at the pit head to go down with the day shift. He ran home and told her something was wrong at the pit. She put her coat on, just left everything and caught the 8.30am bus to the pit. When she finally returned home she knew that her husband John, her son Robert, and her husband’s brother Ambrose were all dead, and another of John’s brothers, Thomas, had been taken to hospital with serious injuries. John William Grainger left a widow Elizabeth, one son John William, and four daughters, Charlotte, Grace, Lillian and Marina. Ambrose Grainger of Mansfield Road, Clowne had also previously worked at Langwith pit and had only been at Markham about one month before John William and Robert. Ambrose served in the war, enlisting in 1915 with the Army Service Corps in Salonica and had several attacks of malaria. Ambrose was married and had two young sons. John William Grainger was 49 years old. His son Robert Emlen was just 21 years old. Ambrose was 41 years old. John William and Robert Emlen were buried in the same grave. Ambrose was buried in the next grave to them at Clowne Cemetery.