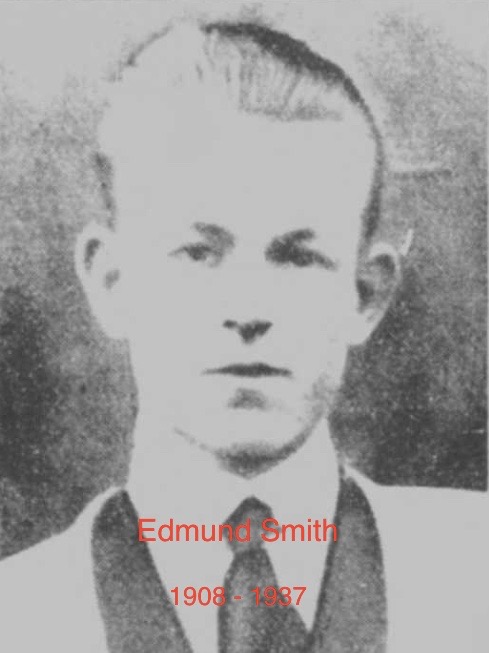 Edmund Smith of 33 South Crescent, Duckmanton was born at Clay Cross and had worked at Markham Colliery since leaving school at 14. Edmund was secretary to the Markham Colliery F.C. for 2 years, and also played for them. He left his widow and 2 sons and was buried at Staveley cemetery.

Edmund was commemorated on the 21st July 2017. The location of the artwork can be found in zone 1 on the trail map which can be downloaded here.

Edmund Smith (29) 33 South Crescent, Duckmanton, was secretary to the Markham Colliery F.C. for the last two years, and played for them. He was married and leaves two small sons, who were playing with their toys when our reporter called at the house on Friday morning.

When she heard of the accident. Mrs Smith rose from her sick bed and went to the pit-head alone and waited for several hours for news of her husband. She was suffering from pneumonia and when finally persuaded to go home by friends was in a state of collapse and a doctor was called.

Smith was born at Clay Cross and had lived in Duckmanton for ten years. He had worked at the same pit since he was 14.

Mrs Smith had made good progress from her illness, our reported was told on Tuesday. We were informed by a relative that Mrs Smith had been terribly upset by a letter she had received on Tuesday morning, the morning of the funeral from a person in London asking for photographs of herself with a view to marriage. Mrs Smith, we were informed, intended forwarding the letter to the proper quarter, namely the police. The funeral took place at Staveley, the Rev H.H. Dibben officiating.

At the time of the accident Edmund was living at 33 South Crescent, Duckmanton and was employed as a stallman. He had worked at Markham Colliery since leaving school at the age of 14.

Further details can be downloaded here: