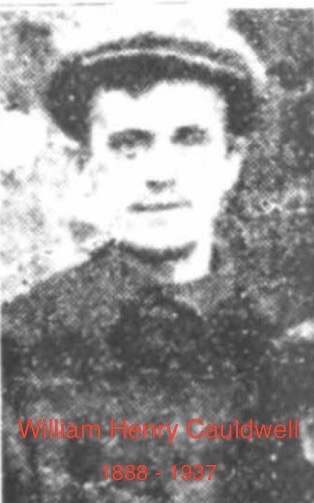 William Cauldwell was born at Slitting Mill, Staveley. He had worked in collieries for 36 years, and had been at Markham 7 years prior to the disaster. He left a widow and five sons, four of working age, but none in the pit. “My husband worked in the pit for 36 years,” his wife said. He never had an accident, but all the same, he was determined to keep the lads out – and he did!” He was a keen footballer in his younger days, playing for Lowgates F.C and was also an ardent angler, member of the Mason Arms Club and a staunch Labour supporter.

William Henry was commemorated on the 4th December 2015 . The location of the artwork can be found in zone 3 on the trail map which can be downloaded here.

When a Derbyshire Times reporter called at the home of William Henry Cauldwell, 49 Main Street, Renishaw, the morning after the accident, he found the youngest of five sons, Peter, playing with a puppy in front of the fire. Peter is eight years old and did not know that his father was dead. He had been told that he had gone away. The puppy was a Christmas present from his father

Cauldwell who was 48, leaves a widow. Four of his sons are working, but not in the pit. “My husband worked in the pit for 36 years,” his wife said. He never had an accident, but all the same, he was determined to keep the lads out – and he did!”

He was born at Slitting Mill, Staveley, but had lived in Renishaw 25 years, ever since he got married. He had worked in collieries for 36 years, and had been at Markham seven years prior to the disaster.

He was a keen footballer in his younger days, playing for Lowgates F.C. He was also an ardent angler, and a member of the Mason Arms Club, Emmett Carr. He was a staunch Labour supporter.

He was not of a superstitious nature, but had often told his family he believed his end would come in the pit. He had worked in collieries many years, starting when he was 13. He helped sink Westthorpe Pit.

Peter had frequently asked his mother, “Has my daddy come home yet?” and when told he had not, added “Never mind mummy, he is sure to write”

Mrs Cauldwell said that he her husband not gone to help a workmate, he would probably have escaped the explosion.

One of the sons walked and ran to the pit when he heard of the accident and after enquiring the names of those involved was told one was named Cauldwell. He replied, “Good God, That’s my father”

Mr Cauldwell had passed safety first tests in mining. On the morning of the disaster he nearly stayed at home, but after hesitating, decided to go. He had complained of pains in his back when he awoke, and his wife had told him to stay at home., but in the end he went to work.